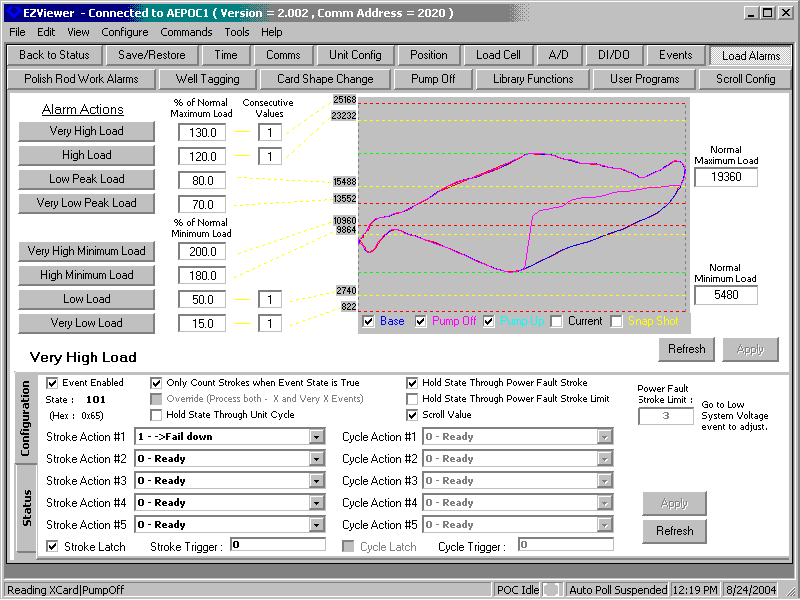 The AEPOC provides alarm monitoring for very low, low, high minimum, and very high minimum loads based on the lowest expected normal card load. It also provides alarm monitoring for very low peak, low peak, high, and very high loads based on the highest expected normal card load. In addition, all load limits may be specified in absolute pounds instead of percentages if desired. Each alarm can vary in sensitivity and persistence before triggering any actions. The actions to take can also be specified, varying from immediate shutdowns for extreme loads or simply taking snapshots of the cards and reporting for less severe alarms. 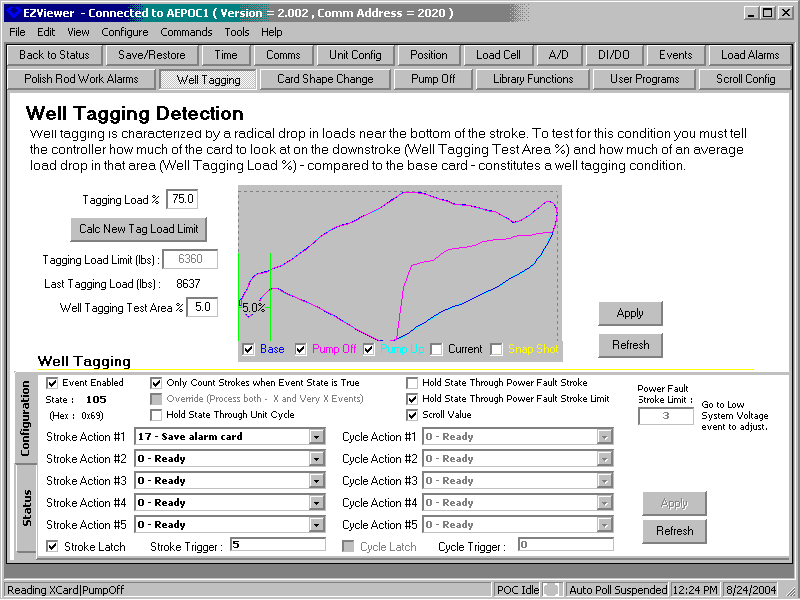 Well tagging alarm configuration allows the operator to determine the percent of the downstroke to examine and compare against a base card derived average load. Deviations from this average trigger a tagging alarm. 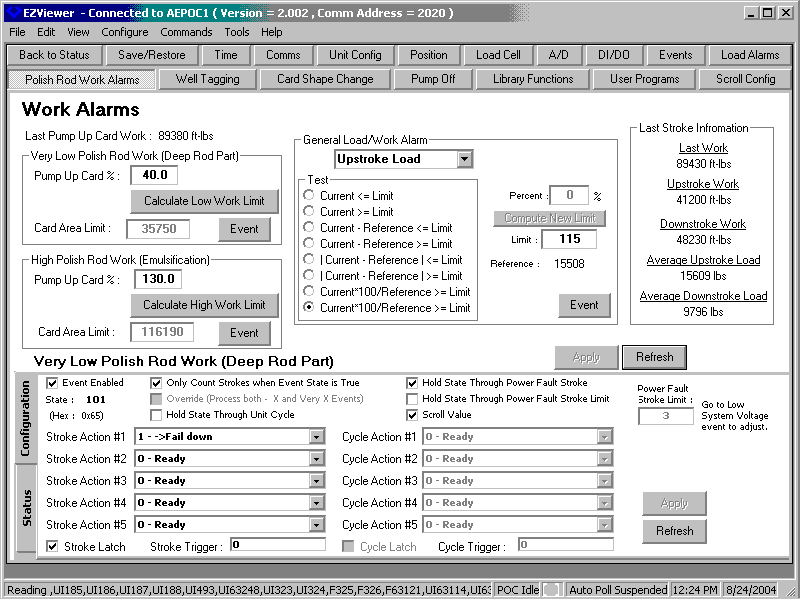 There are three work alarms provided. The first looks for a card that has shrunk which triggers a deep rod part alarm. The area of the card is compared to a percentage of the area of the base card or a fixed limit to determine this condition. Similarly, if the card area expands above a threshold, a high work alarm can be triggered. This is typically associated with emulsification. Finally, a generic load alarm can compare the upstroke and downstroke card areas for an addition work alarm. All can be configured via this screen.

Pump off status and alarm configuration 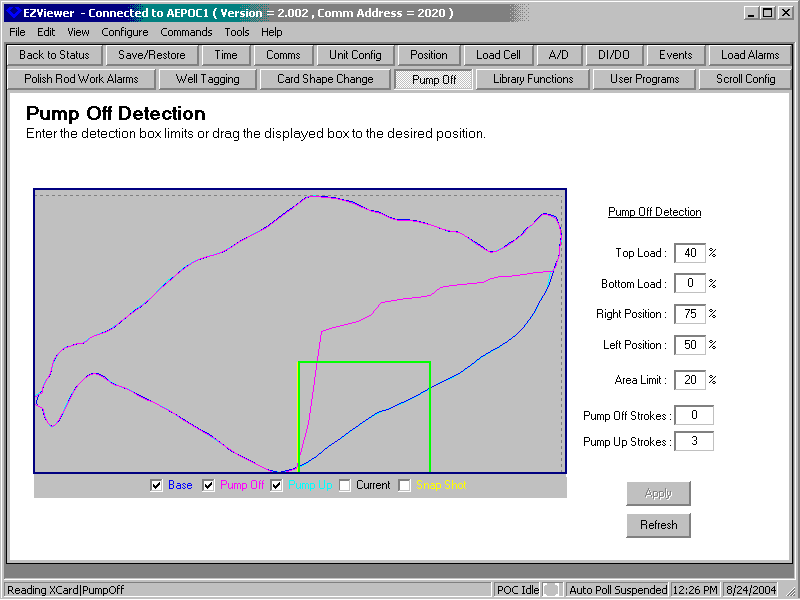 Pump off status and alarm

Pump off is configured via this screen. If the unit is pumped off when it exits pump up, an immediate pump off alarm is triggered with whatever actions are specified by the user. The rectangle can be moved to any part of the card in order to provide a reliable pump off point. This is particularly useful with certain directional wells. 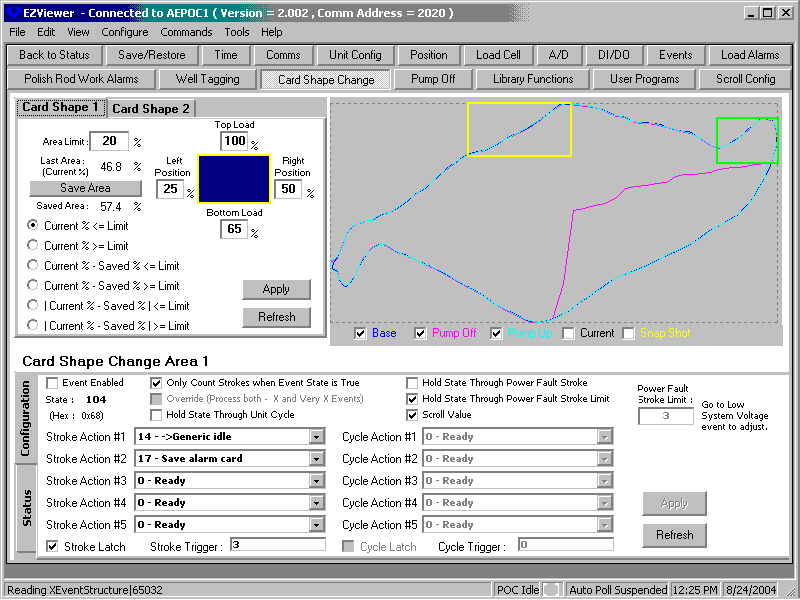 In addition to looking at the pump off rectangle, it is possible to set up two other card shape areas to monitor and compute the area of the card that intersects with them. These can be used to control other aspects of well behavior. In some instances, they will overlap the pump off card area and are used to control variable speed wells. In others, they may be used as a secondary spot to check for pump off on the card. 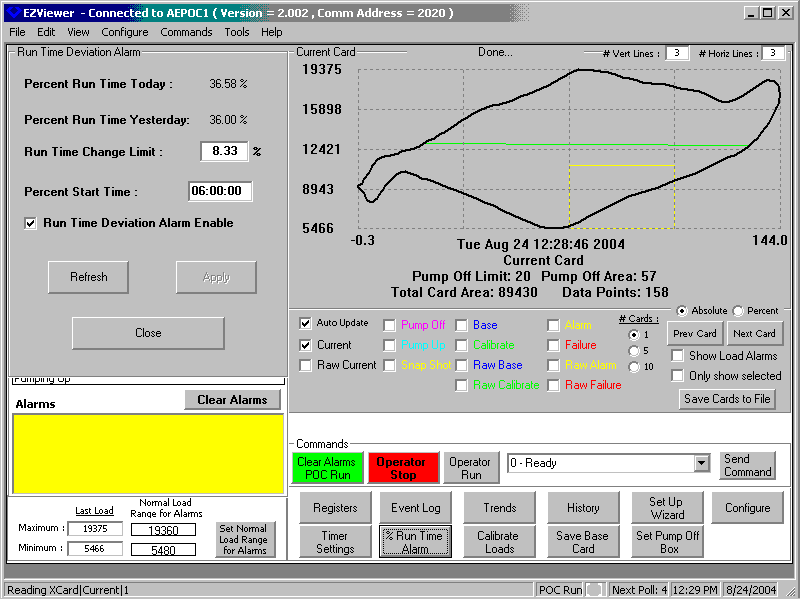 Run time deviations can be monitored and an alarm generated if the well changes from the expected run time by a certain amount. This screen allows this parameters to be changed.